Enemy of the People by Henrik Ibsen 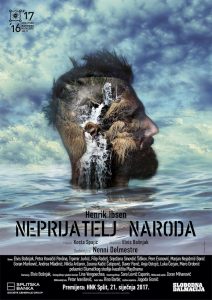 Director’s Notes – Turn the finger towards yourself!

“After much discussion, debate, and research, the Oxford Dictionaries Word of the Year 2016 is post-truth – an adjective defined as ‘relating to or denoting circumstances in which objective facts are less influential in shaping public opinion than appeals to emotion and personal belief’.” (Neil Midgley)

Public opinion, compact conservative majority, the liberal media … words used by Ibsen 135 years ago when writing his Enemy of the People. He wrote a story about a man who wanted to change the world with the truth. How naive, said his contemporaries … How naive we would say today. But is it really so?

From Ibsen’s time to present day, society has radically changed. Since the division into patricians and plebeians to modern civil society with new democratic values, man has had the opportunity to accept new knowledge and improve the state of human consciousness on a personal and universal level. This, unfortunately, did not happen. Man has not changed inside and it is a logical and also an appalling fact that we are now affected by the same problems as Ibsen 135 years ago.

The main theme of this play is the fight for common good. Both sides want the common good. Well then, where’s the conflict? As always, the conflict is between morality and interest, between the truth and the economy. We know that in a society that advocates only profit, truth has no chance against a post-truth. There isn’t a chance that icebergs won’t dissolve, no way that climate change won’t cause major floods, fires, pollution, wasteland … Why?  No matter how much we’re manipulated with the post-truth rhetoric, we know that the true reason is profit, profit and only profit. So now that we know that, can somebody stop it? A super-hero?  A new Dr.Stockman?  Someone … who, of course, isn’t us, because we know in advance what will happen to that fool. What can we do except shrug it off … while water is rising up to our necks. Then it might be too late, we might be lost, but what can we do?

This Ibsen’s work in the adaptation of Elvis Bosnjak, is a true political theater of our times which I’m personally and artistically interested in because it provokes and imposes a number of important issues that need to be addressed by the society and the theater. These past ten years we’ve seen enough of the so-called political theater that points a finger at the left, right and center, against this and that transient politician, pointing a finger at insignificant charges for their even less significant crimes and misdeeds. Enemy of the people compels us to turn that finger towards ourselves and that’s why it is so painfully current .
Nenni Delmestre
Split, 4 January 2017.